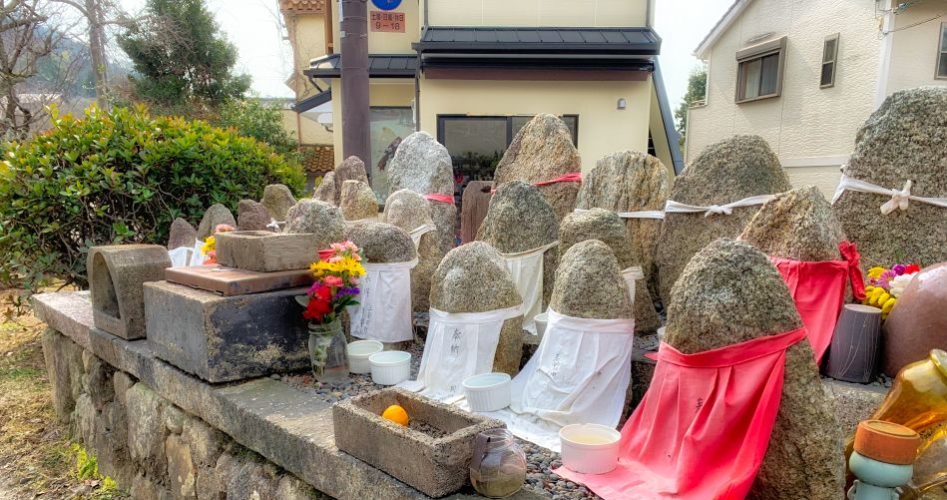 Ojizo-sama on Along the Philosopher's Walk

The Philosopher’s Walk is a pedestrian path that follows a cherry-tree-lined canal in Kyoto, between Ginkaku-ji and Nanzen-ji. Named after Philosophy Professor Nishida Kitaro who walked the path for daily meditation, you can use this route to some very charming shrines and tranquil gardens. It passes several temples and shrines including well-known ones such as Hōnen-in (法然院), Ōtoyo Shrine (大豊神社), and Eikan-dō Zenrin-ji (永観堂禅林寺).

It took me a whole day to complete this course at a leisurely pace. During Hanami or cherry blossom viewing in spring, both tourists and locals crowd the path. If you want to avoid the crowds, try visiting during fall on a weekday and start early in the morning.  Most temples open at around 8:30 AM or 9:00 AM, and close around 4:00 PM or 5:00 PM.

Officially named Jishō-ji (慈照寺, “Temple of Shining Mercy”), Shōgun Ashikaga Yoshimasa originally constructed the temple grounds of Ginkaku-ji as a place of rest and solitude, much like Kinkaku-ji. The Jishō-ji really deserves its own blog post, so I’ll go into detail later. But in short, I found the wooded grounds covered with a variety of mosses superbly beautiful. Here nature doesn’t just surround the Silver Pavilion – leaf, wood, stone, and water provide a serene context for the composition of the structure.

Just a five-minute walk from Ginkaku-ji, Hōnen-in offers a cozy atmosphere when compared to the grand towering shrines of Kyoto.  The moss-covered gateway and the two purifying sand mounds patiently welcome visitors. Humble dirt paths lead through trees to parts of the temple grounds and a cemetery. Lovers of Japanese literature will often stop at the lonely grave marker of illustrious Jun’ichirō Tanizaki.

Tread slowly or you’ll miss the entrance to Otoyo Shrine, a perfect hidden refuge from the crowds found at Ginkaku-ji. Two mice statue guard the entrance along with other quirky figures scattered throughout the grounds. The mice are supposedly related to an ancient story about Okuninushi, the god of marriage.  Okuninushi fell in love with a princess, but the god Susanoo became envious and ensnared Okuninushi in a fire. A courageous mouse helped Okuninushi escape, and in the end, he and his princess happily eloped.

Kumano Nyakuoji-jinja enshrines the god of academic success and business prosperity. According to legends, Yatagarasu, the 3-Legged Mythical Raven, resides within the temple serving the god as a messenger. If you look carefully you’ll be able to find tri-legged raven symbols in the roof tiles, as well as in the “Kumanogongen” lettering of the main shrine. Since other stories also call Yatagarasu the God of Victory, sports teams will put his symbol on jerseys or in their logos.

Tourists flock to Eikan-do Zenrin-ji for the autumn splendor, but I suggest visiting during any season for its fantastic gardens. Nearly every local can recognize the profile of Eikando’s poised Tahoto Pagoda, even when partially sheltered among the trees on a hillside above other buildings.

I also found Hojo Pond wonderfully picturesque, especially when framed in the vivid colors of fall. The best time to visit is the second half of November when the temple is opened in the evening for special illuminations.

Nanzen-ji is more of a complex rather than a singular temple, but the whole area is named after the largest temple found there.  The central temple grounds are open to the public free of charge, but separate fees apply for entering temple buildings and sub-shrines. Before the grounds became a religious complex, it was a retirement villa for the 90th Emperor of Japan. One could spend the whole day wandering the grounds of Nanzen-ji, but the worthiest stops are the Sanmon Gate, Tenjuan’s rock garden, Konchi-in Temple, and an aqueduct built in the Meji era.

During the Meji era, there was a need to transport water, freight, and passengers from Lake Biwa to the city of Kyoto and the result was the Lake Biwa Canal. Not only did it provide much needed waterworks, but also provided Japan’s first public hydroelectric power generator.

To get to Keage Incline from Nanzen-ji Temple, there are several routes, but the way I took was a narrow path along parts of the Lake Biwa Canal. It starts near the Suirokaku Water Bridge and follows along a waterway toward the south. I would suggest taking an alternate route during the rainy season because the path can get muddy.

During the cherry blossom season, the Keage Incline is a place of magnificent scenery.  Gorgeous rows of cherry blossom trees on both sides of the railroad tracks. From late March to early April, roughly 90 cherry trees explode in floriferous clouds of pink.

The Nejirimanpo provided easy access routes to various points along the Lake Biwa Canal. This quick stop provides a whimsical Instagram post — especially if you use your imagination and have enough light to capture the spirally laid bricks.

The tunnel is right near the entrance to Keage Station, which you can take the Tōzai Line back into downtown Kyoto just in time for a nice dinner.