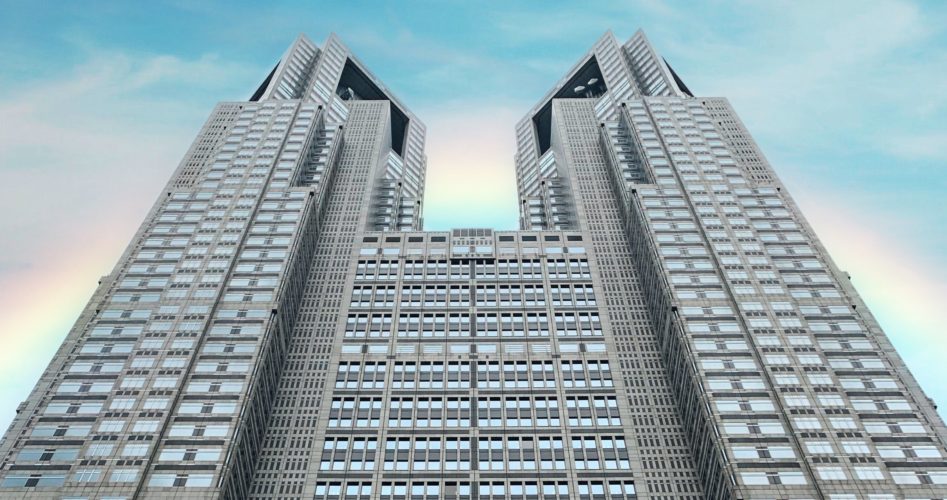 If you are a Godzilla fan, you’ll recognize this building. I certainly did! This building is from when the king lizard himself crashes right through the mid-section in the 1991 film “Godzilla vs. King Ghidorah.”

The Tokyo Metropolitan Government Building (also known by locals as Tocho “都庁”) is home to two observation decks: South Tower and North Tower – Each having their own elevator entrance but both on the 45th floor. As of 2019, the North Tower Observation room is going under renovations but will reopen sometime mid-January 2020. Meanwhile, the South Tower Observation room is open and occasionally hosts live musical performances during your viewing pleasure.

At a height of 202 meters and favorable weather conditions, you can spy Tokyo Tower, Meiji Shrine, Tokyo Dome, Mount Fuji, Tokyo Bay, and Tokyo Skytree. You can even get a glimpse of Yokohama to the west and Chiba to the east. Best time to view is early morning in Autumn or Winter when the air is less hazy. Sorry photographers leave your tripods at the hotel.

To enter the Observation deck, you’ll need to go down to the Observation elevators on the first floor, where security will check your bags before entry. Both towers have a café where you get reasonably priced refreshments and snacks. And of course, there are souvenirs available for purchase to commemorate your visit.

Since Tocho is a government building, the observation deck will be closed on certain holidays. On December 29th and January 3rd, both towers are closed but open on Jan 1st to welcome in the New Year. Because of the holiday period, there is less traffic and factory pollution in the Tokyo area, and you’ll be able to see fantastic views of Mount Fuji. Maybe snap some good pics with a sizable zoom lens.

Last time I checked the South Observation deck closes every first and third Tuesday of the month. Be sure to check the Tokyo Metropolitan Government’s twitter account for updates and any closures when you’re in town.

Shinjuku is rife with delights, so if you’ll be making your way down to the Tocho, you might as well make a day trip out of it. I suggest visiting Shinjuku Central Park right next door, or Shinjuku Gyoen National Garden on the other side of Shinjuku Station. For some light family-friendly amusement, visit the TOTO Tokyo Center Show Room to marvel at Japanese toilet and washlet technology. For late-night fun, have your pick from hundreds of themed izakayas or Japanese bars in Golden Gai, but do make a quick stop at the ever instagramable Hanazono Shrine beforehand.

Tokyo Metropolitan Government Building gets high marks for being a really pretty building where you can really get some nice street photography shots with a decent 55mm lens or just a smartphone camera. The Observation rooms are nice, but not a target destination in themselves since there isn’t much else to do there except take in the views. It’s best as a side destination when visiting Shinjuku for the day.